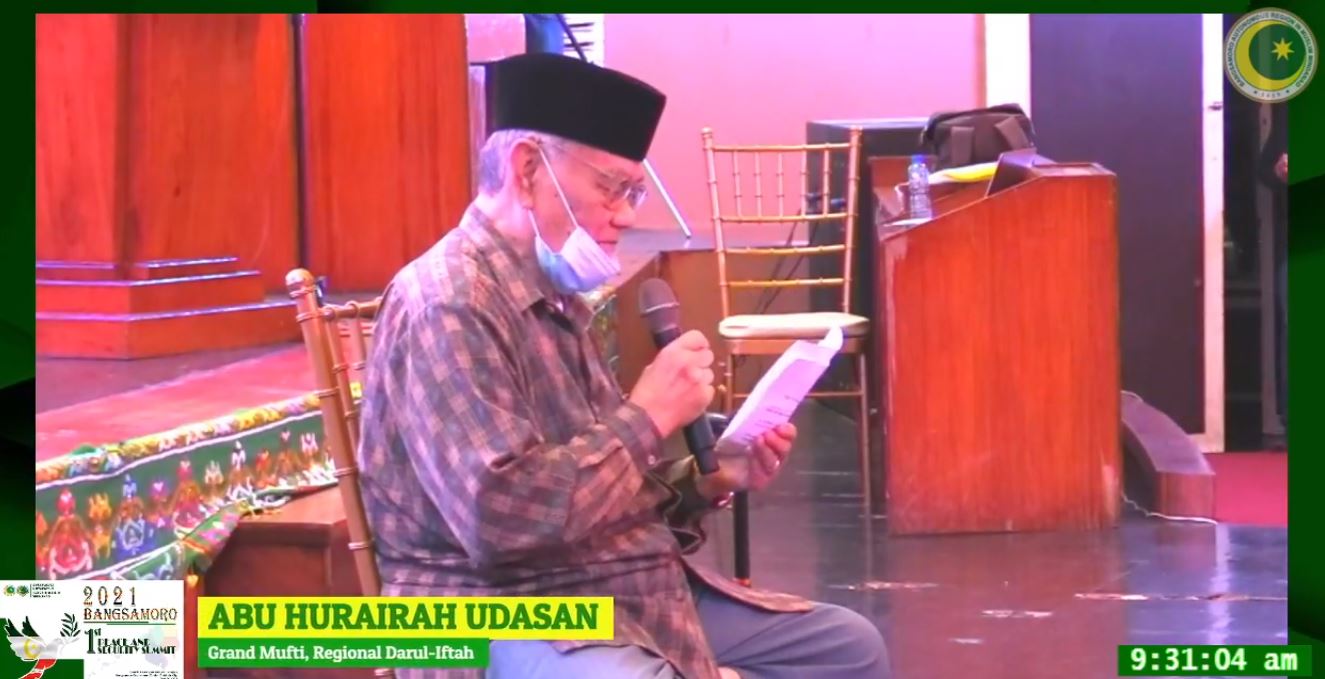 BARMM, 24 MAY 2021 – On Monday Morning, the Bangsamoro Peace and Security Summit has been conducted at Shariff Kabunsuan Cultural Complex.

The said event was attended by the different Ministries of the BARMM headed by his Excellency Chief Minister – BARMM, AHOD B. EBRAHIM together with the BTA Parliament Speaker Atty. Ali Pangalian M. Balindong, the Senior Minister, OCM-BARMM Abdulraof A. Macacua, Minister, MILG Atty. Naguib G. Sinarimbo and  Bangsamoro Mufti Abuhuraira A. Udasan of the Bangsamoro Darul-Ifta’ and some officials from Philippine National Government such as the Secretary of National Defense Delfin N. Lorenzana, Secretary of the Interior and Local Government Eduardo M. Año as well as the Presidential Peace Adviser Peace Process Carlito G. Galvez.

Mufti Udasan has led the opening prayer (Invocation) and before lunchtime, he presented the summary of Pre-summit Output from the religious cluster.

According to Mufti Udasan after thorough discussion with the office of the Wali and the MIPA, the major problem to be dealt with here are :

1-The unnecessary conflict within the family circle of the BARMM. “Ridos”

Mufti emphasized that our guide (basis) in dealing with the un – necessary conflict “Ridos” is the Qur’an and Hadith :

Allah said: “And if two parties or groups among the believers fall to fighting, then make peace between them both, but if one of them rebels against the other, then fight you (all) against the one that which rebels till it complies with the Command of Allah; then if it complies, make reconciliation between them justly, and be equitable. Verily! Allah loves those who are equitable.” [Al-Hujurat: 9]

In this verse, the first step to be taken is to reconcile between the two conflicting parties, if any of the two parties do not concede to reconciliation, then that party is to be fought until it complies with the law of Allah.

Mufti has also elaborated that in dealing with the lawless extremist group is persuasive approach according to Islamic Perspective, but if this does not avail, then a peril of taking a temporary drastic measure is justified, knowing that sometimes only violence can quell violence. Eventually, he mentioned the verse from the Glorious Qur’an :

“And fight them on until there is no more Fitnah (persecution) and the Din becomes Allah’s. But if they cease, let there be no transgression except against (wrong-doers)” Surah An-Nisa:193

Maximising Weekends and Economy for BARMM