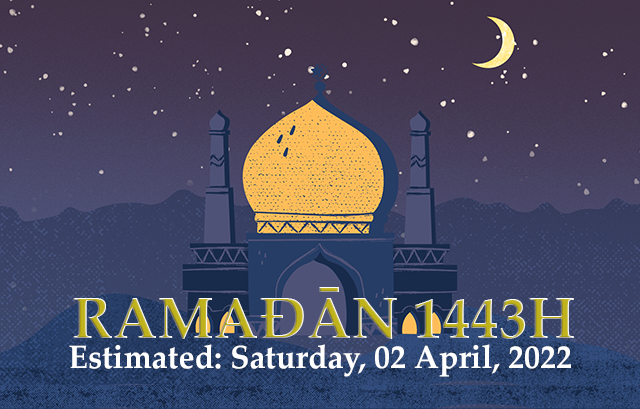 In the name of Allah, Most Gracious, Most Merciful

Ramadan is the 9th month in Islamic calendar / Hijri Calendar. The length of the Month varies between 29 and 30 days depending on the sighting of the Shawwal Moon which leads to the much awaited Islamic festival of Eid ul Fitr on the 1st of Shawwal. Ramadan is one of the Five Pillars of Islam and during this holy month, Al-Quran was first revealed to the Prophet Mohammed (S.A.W.). The word ‘Ramadan’ comes from the Arabic world ‘Ramad / Ramida’ which means scorching heat or drought. So the word Ramadan means abstinence from eating and/or drinking anything from dawn till dusk.

Fasting is Obligatory during Ramadan:

Millions of Muslims across the world observe fast from dawn till dusk during the whole month of Ramadan as this is the most sacred month for the whole Muslim Ummah.

The word Fasting has different words in different languages around the world. It is known as ‘ayuno‘ in Spanish, ‘Jeûne’ in French, ‘Perhiz’ in Turkish, ’ صوم/ صيام ‘ in Arabic and ‘Puasa’ in Indonesian and Malay. The word ‘Sawm / Siyam’ (صوم/ صيام) means to abstain or refrain from something. It means to refrain from food, drink, sexual intercourse and all that which breaks the fast with the sole intention of obeying the commandments of Allah. Whoever denies this obligation of fasting during Ramadan does not remain a Muslim.

Fasting was made obligatory during the month of Ramadan on all adult Muslims in the Second Year of Hijri (Migration from Makkah to Madinah of Muslims). As Almighty Allah says in Quran:

Who is exempted from Fasting:

Even though fasting in Ramadan is obligatory upon every able Muslim, Allah has pardoned and excused certain people from fasting if they are unable to fast during Ramadan due to certain legitimate reasons. In Surah Al-Baqarah (2:185), Allah Has clearly mentioned that sick people and travelers are exempted from fasting during Ramadan. In addition to that, in the light of this Ayah and according to many scholars, following people are also exempt from fasting:

4- Women who are pregnant or breastfeeding.

6- Children who have not reached puberty

Things that invalidate the Fast

Things that invalidate one’s fast are:

1- Medication taken through nose or ears

3- Water accidentally goes down the throat whilst gargling

9- Eating Iftar (meal to be consumed after breaking the fast at Maghrib Salah) at the wrong time i.e. eating it before sunset with the assumption that it is after sunset

The month of Ramadan is an opportunity given by the Gracious Creator for His servants to come close to Him, seek forgiveness for their sins, and fulfill their religious duties. Allah Has said in The Quran:

“… and men who fast and women who fast, … Allah has prepared for them forgiveness and a mighty reward.”

All past sins of a fasting person will be forgiven:

It was narrated by Abu Huraira (R.A.) that Prophet Mohammad (S.A.W.) said:

“Whoever fasts Ramadan out of faith and hope for reward, his past sins will be forgiven.”

Gates of Heaven are opened

It was narrated by Abu Huraira (R.A.) that Messenger of Allah (S.A.W.) said:

Reward of all good deeds are increased by Seventy Times

Salmaan Farsi (R.A.) says that on the last day of Shabaan, Allah’s Messenger (S.A.W.) spoke us and said:

‘O People, there comes to you a great month now, a most blessed month, in which is a night greater in value and goodness than a thousand months. It is a month in which Allah Has made fasting fardh (obligatory) by day and has made Sunnah the Taraweeh Salah by night. Whosoever wants to be close to Allah by doing any good deed, for such person shall be the reward like the one who had performed a fardh in any other time and whoever performs a fardh (obligation), shall be given the reward of seventy faraaidh (obligations) in any other time.’

Make most out of Ramadan:

One can make the most out of Ramadan by doing the following good deeds:

Ramadan is also called the month of the Quran so one must Recite Al Quran during the whole month. Tarawih Prayers – usually held in mosques – is one of the ways Muslims can complete the recitation of The Holy Quran. These Prayers are known as ‘Mustahab’ (an action which will be rewarded but the omission of which is not punishable) for Muslims to read the whole Quran during Ramadan and strive to complete it. However, it is not obligatory. Some Muslims do it by Completing one (1) Juz’ each day for the 30 Days of Ramadan.

Here is the collection of some of the Verses in Quran about Ramadan.

Lailat ul Qadr, also called the ‘Night of Power’ is one of the most coveted nights of the Islamic Year. it is not clear which night is Laylat ul Qadr. However, according to authentic teachings of the Prophet Muhammad (S.A.W.), Muslims are advised to spend the 21st, 23rd, 25th, 27th and 29th nights of Ramadan in worship and doing good deeds to assure finding Laylat ul Qadr.

Itikaf means to be in isolation in a Masjid or at home with the intention of solely dedicating your time to the worship of Allah (SWT). It is Sunnat-al-Muaqidah (Sunnah that is urged to be performed) to sit in Itikaf in the last 10 days of Ramadan. A person may commence Itikaf after sunset of 20th of Ramadan, and end it when the moon for Eid is sighted. The Sunnah stays the same if the month of Ramadan is of 29 or 30 days.

Here is All you need to know about Itikaf in Ramazan.

Tarawih are the extra prayers some Muslim Communities perform at night after Isha Prayers during Ramadan. Traditionally, a Hafiz (memorizer) of the Quran leads the prayer. He recites the Quran in small portions, in proper sequence, every night and completes the recitation of the whole Quran before the end of the month of Ramadan. Every Muslim who attends such prayers regularly gets the opportunity of listening to the whole Quran in a month.

Zakat is another Pillar of Islam, and giving Charity becomes even more important during Ramadan. It is a way to purify your wealth for the will of Allah and is payable on assets owned over one lunar year. The collected Zakat is required to be given to the poor and deserving people.

You can calculate this year’s Zakat using IslamicFinder’s Zakat Calculator.

In Ramadan, all good deeds are rewarded more than in any other month of the year. This is why many people choose to give Zakat (Sadqa) to the poor in this month.

Here are the Ways to be charitable in Ramadan.

1- Fast during Ramadan with the intention of seeking rewards from Allah.

2- Perform your five prayers on time in congregation (Jamah)

4- If possible, perform Umrah during Ramadan as it is equal to Hajj in reward. (Tirmidhi: 939)

5- Refrain from doing bad deeds such as lying, cursing, backbiting and slandering etc.

6- Increase the time you spend in the remembrance of Allah, seeking forgiveness, asking for paradise and protection from hell

7- Offer voluntary Salah (Nawafil) more. Increase your supplications or duas for yourself, your parents, your children and the Muslim Ummah

Ramadan is the month of worship and contemplation. Every Muslim should avail this chance to receive countless blessings from Allah during this month by standing in prayer. Ask for Allah’s forgiveness, worship with genuine dedication and hope for Allah’s reward in this world and the hereafter.

Here you can also find our featured page of Ramadan.