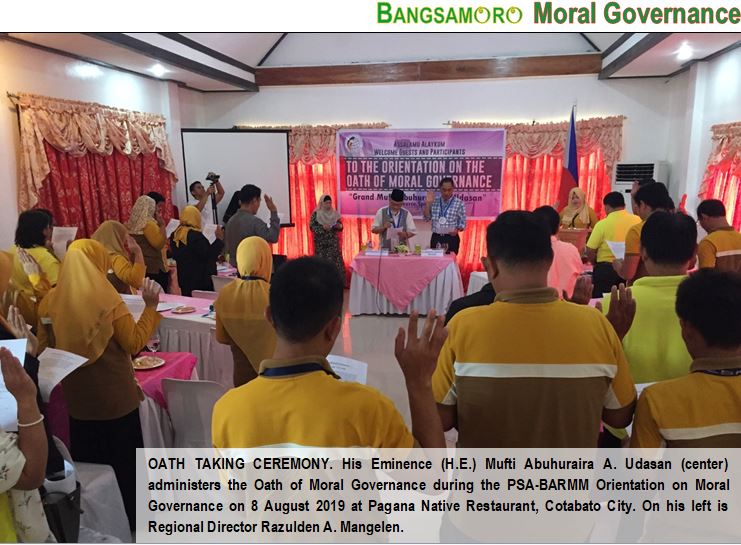 When the Regional Darul-Ifta Team arrived, it was amazed on the punctuality of the PSA-BARMM employees who were already in the venue as early as 7:00am and they were eager to hear the Orientation on the Oath of Moral Governance.

Kudos to PSA-BARMM Regional Director Razulden A. Mangelen who led his employees to come before the time and not ‘late ‘o’ clock’ as one of the ingredients of moral governance.

Likewise, warmest congratulations to PSA-BARMM for accepting the 2nd challenge to swear-in on the Oath of Moral Governance.

It can be recalled that all appointed members of the Bangsamoro Transition Authority (BTA) had inclusively sworn-in in the name of Allah by verbalizing ‘Wallahi Billahi Tallahi’ in front of the Glorious Qur’an as a vow for moral governance during their 1st inaugural session held at Shariff Kabunsuan Cultural Complex (SKCC) here in the city.

The advocacy on moral governance is entrusted by the Bangsamoro Government to H.E. Abuhuraira A. Udasan as the Mufti of the Bangsamoro who also concurrently the Executive Director of Bangsamoro Darul-Ifta’ – BARMM.

During the Orientation, the Mufti started his talk by introducing the first Qur’anic verse revealed to Prophet Muhammad (peace and blessing be upon him) by Allah that says:

Meaning, our final arbiter is the Glorious Qur’an because it encompasses all ‘walks of life’. Be it governance, public service or even statistics, among others.

“Now, let us come to the main subject of our discussion”, The Mufti divulged

“The Glorious Qur’an is everlasting punctual”. Allah said in the Glorious Qur’an: “I take an oath by time! Without a doubt, each and every human being is in a state of loss. Except for those individuals who have belief and perform actions which are righteous and good and advise one another to the truth and advise one another towards patience.” (Surah Al-As’r: 1-3), The Mufti quoted.

Additionally, The Prophet (peace and blessing be upon him): “There are two blessings forgotten by people: health and free time”.

Admittedly, time is more than a gold. If it passes, it will never come to pass again.

Undoubtedly, there are opportunities lost in time when done in untimely manner even with good intentions.

“In doing advocacy, for example, you cannot approach a person who is hungry, angry and the one asleep especially the one pretending to be asleep.” The Mufti told.

“Meaning, in a hungry society who is below poverty line, it is very hard to approach people especially when there are lootings everywhere during food crises after disasters stricken them.” The  Mufti explained.

“It is very difficult also to speak in a society who is angry because of impending unfavorable policies to be passed as manifested by mass demonstrations.” The Mufti elaborated.

“Likewise, it is not easy to talk to a society who is asleep whose people are deadened mind due to drug abuse proliferations.” The Mufti added.

Other distinctive ingredients of moral governance include punctuality, honesty, credibility, compassion in dealing with humanity, reliance on Allah after the consultation has been made, unwavering obedience to Allah and His Messenger but conditional obedience to the leaders or authorities, validation of news report, and reconciliation and unity, among others.

No to Pork Consumption!

Mufti Explains What is Moral Governance All About