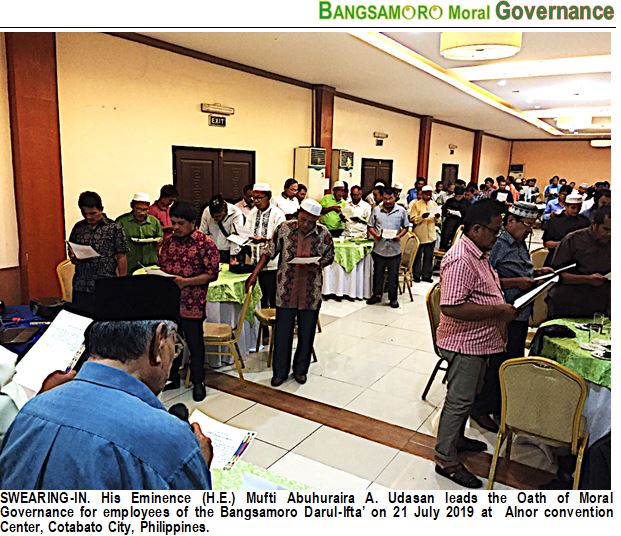 BARMM, Philippines, 21 July 2019 –  It can be recalled that on 29 March 2019, the newly appointed interim members of the Bangsamoro Transition Authority (BTA) had inclusively sworn-in in the name of Allah by verbalizing ‘Wallahi Billahi Tallahi’ in front of the Glorious Qur’an as a vow for moral governance during their 1st inauguration held at Shariff Kabunsuan Cultural Complex (SKCC), Cotabato City.

On 7-9 April 2019, the Bangsamoro Darul-Ifta’ had sponsored Ramadhan forum on moral governance for all ministries, agencies and offices of Bangsamoro Autonomous Region in Muslim Mindanao (BARMM) at SKCC, Cotabato City. However, only few availed of this forum.

On 8 July 2019, the Office of the Interim Chief Minister (ICM) issued a Memorandum Order No. 341 to all ministries, agencies and offices of the BARMM to start cascading the moral governance with the Bangsamoro Darul-Ifta’ (BDI) as the lead office.

Entrusting moral governance to the BDI is an intelligent choice considering that it is the House of Islamic Fatwa (Islamic Rulings). It is in fact a part of moral governance as quoted in the Glorious Qur’an:

Allah said: “Indeed, Allah commands you to render trusts to whom they are due.”  (An Nisa:58)

Complementarily, compliance to the orders of those in authorities is likewise a part of moral governance and it is consistent with the ordainment of Allah as stated in the Glorious Qur’an:

“O you who believed, obey Allah and obey the Messenger and those in authority among you. And if you disagree over anything, refer it to Allah and the Messenger, if you believe in Allah and the Last day. That is the best (way) and best result.” (An Nisa: 59).

On 21 July 2019, the BDI conducted an Advocacy on Moral Governance at Alnor Convention Center in Cotabato City with the presence of Minister Mohammad S. Yacob, an Islamic scholar who heads the Ministry of Agriculture, Fisheries and Aquatic Resources (MAFAR), as the representative of the ICM. 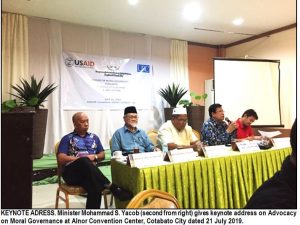 In spite of Sunday a weekend, the Advocacy was scheduled to free the weekdays for the walk-in clients and visitors thereby maximizing public services as part of moral governance too.

The said Advocacy was attended by 120 Ifta employees, with few guests from other ministries, agencies and offices of BARMM.

Among the agenda tackled were the RDI mandates, the 12-Point Priority of the Bangsamoro Government, and the Moral Governance.

‘First things first’, the BDI had laid down first the features of moral governance and tailored the Oath of Moral to be promoted and cascaded to other ministries, agencies and offices because it is not logical to advocate and cascade the moral governance without implementing it first to themselves.

It is not also practical for the BDI not to put into practical life the essence of moral governance because Allah explicitly said in the Glorious Qur’an that:

“Do you order or enjoin al-birr (righteousness, piety or obedience to Allah) on the people and forget (to practice it) yourselves while you recite the Scripture? Have then no sense?” (Al Baqarah: 44).

Other distinctive features of moral governance are punctuality, honesty, credibility, compassion in dealing with humanity, reliance on Allah after the consultation has been made, unwavering obedience to Allah and His Messenger but conditional obedience to the leaders or authorities, validation of news report, and reconciliation and unity, among others.

Finally, we need to embrace the moral governance per se with open heart and mind because it is the commendable ‘way forward’ for the Bangsamoro to have the best result as quoted earlier in the Surah An Nisa, verse 59.

Statistics is Made Simple!