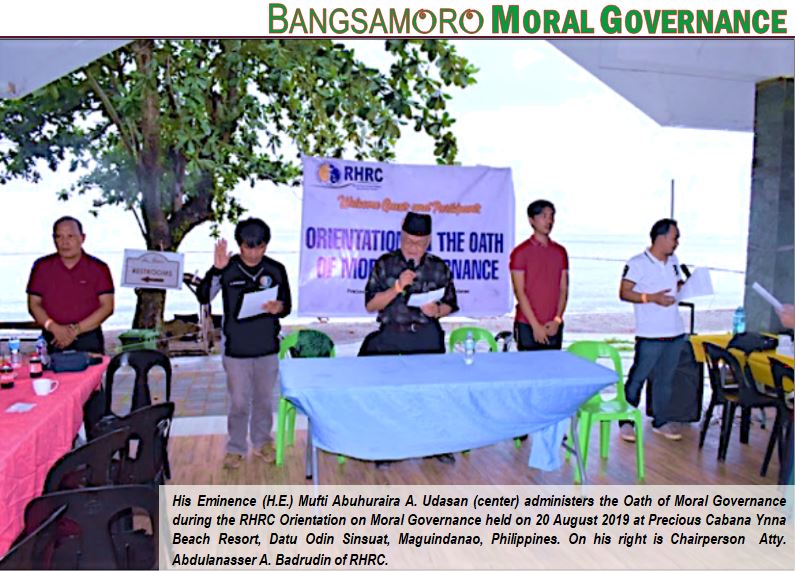 Cotabato City, Philippines, 20 August 2019 – As the sun rose with the breeze by the sea, a troupe of employees of the Regional Human Rights Commission (RHRC) – Bangsamoro Autonomous Region in Muslim Mindanao (BARMM) started to flock in a tranquil and serene beach resort in Datu Odin Sinsuat, Maguindanao to attend the Orientation on the Oath of Moral Governance.

Chairperson Badrudin took the 3rd challenge to swear-in on the Oath of Moral Governance after the Bangsamoro Darul-Ifta’ and Philippine Statistics Authority (PSA) – BARMM had sworn-in.

It can be recalled that all appointed members of the  Bangsamoro Transition Authority (BTA) inclusively sworn-in in the name of Allah by verbalizing  ‘Wallahi  Billahi  Tallahi’ as a vow for moral governance during its 1st inaugural session held at Shariff Kabunsuan Cultural Complex (SKCC), Cotabato City.

The advocacy on moral governance is entrusted by the Bangsamoro Government to H.E. Abuhuraira A. Udasan as the Mufti of the Bangsamoro and concurrently the Executive Director of Bangsamoro Darul-Ifta’ – BARMM.

When the RHRC orientation started, The Mufti introduced that “moral governance can be interchangeable with godly governance” because everything we do in this world must conform with the divine guidance through the revelation of the Glorious Qur’an and the Sunnah of Prophet Muhammad (peace and blessing be upon him).

“The Glorious Qur’an was revealed continually to the Prophet (peace and blessing be upon him) which must be read, understood and put into practical life”, The Mufti explained.

Allah said in the Glorious Qur’an: “Read in the name of your Lord Who created.” “Read and your Lord is Most Honorable.” (Surah Al-Alaq: 1 & 3), The Mufti quoted.

Islam is a complete way of life. It talks about science, health, environment, energy, economy, leadership, governance, social justice, and family ties, among others.

Allah said in the Glorious Qur’an: “This day I have perfected for you your religion, and have bestowed upon you my bounty in full measure, and have been pleased to assign for you Islam as your religion.”  (Surah Al-Maidah: 3).

“Now, let us come to our main topic which is moral governance,” The Mufti said.

“Stand firm for justice even if it be against yourselves”, The Mufti conveyed.

Allah said in the Glorious Qur’an: “O you who believed, be persistently standing firm in justice, witnesses for Allah, even if it be against yourselves or parents and relatives. Whether one is rich or poor, Allah is more worthy of both. So follow not (personal) inclination, lest you not be just. And if you distort (your testimony) or refuse (to give it), then indeed Allah is ever, with what you do, Acquainted.” (Surah An-Nisa: 135), The Mufti cited.

Likewise, Allah said in the Glorious Qur’an: “O you who have believed, be persistently standing firm for Allah, witnesses in justice, and do not let the hatred of a people prevent you from being just. Be just; that is nearer to righteousness. And fear Allah; indeed, Allah is Acquainted with what you do.” (Surah Al-Maidah: 8), The Mufti further cited.

Allah has commanded also his messengers to establish justice as quoted in Hadith: “O My slaves, I have forbidden injustice for Myself and forbade it also for you. So avoid being unjust to one another.” (Narrated by Sahih Muslim).

During the time of Prophet Muhammad (peace and blessing be upon him), a woman of the Makhzoom family with good connections was found guilty of theft. For the prestige of the Quraish, some prominent people including Usaamah Ibn Zayd (may Allah be pleased with him) interceded to save her from punishment. The Prophet (peace and blessing be upon him) refused to forgive the crime and expressed displeasure saying: “Many a community ruined itself in the past as they only punished the poor and ignored the offenses of the exalted. By Allah, if Muhammad’s (My) daughter Fatimah would have committed theft, her hand would have been severed.” (Narrated by Bukhari).

Other distinctive features of moral governance include punctuality, honesty, credibility,  compassion in dealing with humanity, reliance on Allah after the consultation has been made, unwavering obedience to Allah and His Messenger but conditional obedience to the leaders or authorities, validation of news report, and reconciliation and unity, among others.

Moreover, “Islam is a religion of association not isolation; accommodation not marginalization; and inclusivity not exclusivity,” The Mufti quoted.

The Mufti Discusses Islamic Leadership with the Newly Elected LGUs

Maximising Weekends and Economy for BARMM

No to Pork Consumption!